....And Then The Fandoms Came

A combination of book reviews and other things of my interest. 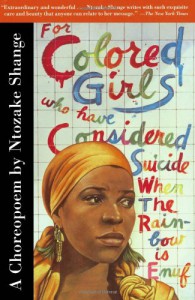 Title: for colored girls who have considered suicide/ when the rainbow is enuf

for colored girls was something that I was really looking forward to reading and was glad that I actually found a copy of. This book of poetry I think was popular in its own right, but the movie being made and coming out did bring it further attention, all of which it deserves. Shange has a style like no other, and says things like no other as well. Both of which are A++ in my book. She discusses sexism, racism, rape, domestic abuse, and more. She brings up issues that affect women of color, especially black women, and specifically places her narrative on black women. Something I really liked. I did resonate with a lot of poems, especially the ones dealing with racism, sexism, and/or just being black and woman at the same time. And I didn't resonate with some poems, and I don't think I was meant to. And even when I didn't necessarily share an experience with one of the characters, I still understood and got all of their feelings. Point being. I loved it. It was great. Glad I read it. Adored it.